“The Dillo Shall Rise Again!” and Again and Again…

Posted on December 14, 2015 by bullersbackporch 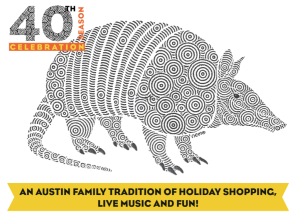 Tomorrow, the 40th anniversary of the Armadillo Christmas Bazaar begins, open daily from 10am to 10pm until Christmas Eve at Austin’s Palmer Events Center.

Christmas season officially starts for me with opening day of the bazaar.

The first Armadillo Christmas Bazaar resulted from a casual conversation between AWHQ worker Bruce Willenzik and musician Lucinda Williams.  See, Austin’s outdoor People’s Renaissance Market hosted various artists and craft vendors year-round, but of course, winter weather hampered their sales. What should be a major part of their annual sales fell subject to the weather, and both they and their sales suffered accordingly.

Lucinda mentioned it would be great if the vendors had someplace inside to sell their wares during the holiday season, as related by Willenzik in this recent KUT interview:

As Willenzik remembers it, Williams remarked “It’s too bad those artists don’t have a warm dry place like this to sell in.”

It would be the following year before AWHQ pulled the first bazaar off, but this solved several problems at once. It not only gave the craft vendors a warm, dry place for their holiday sales, but also gave the ‘Dillo a revenue boost during the slower winter season when fewer musicians touring meant fewer shows. Moreover, it gave Austinites the chance to shop a wider variety of goods in a better atmosphere. Layer on live music nightly and you’ve got an incomparable holiday shopping experience. 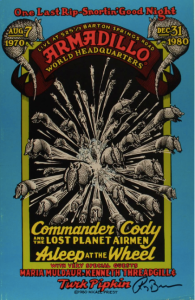 Last Dance at the ‘Dillo, poster by Michael Priest

Unfortunately, the Armadillo itself often operated on good will with little revenue.  Band guarantees were high, ticket prices were low, and they were forever struggling to stay open.

“People don’t remember this part: the months and months of drudgery. People talk about the Armadillo like it was a huge success, but there were months where hardly anyone showed up. After the first night when no one really came I ended up crying myself to sleep up on stage.”
Eddie Wilson, AWHQ co-founder

Finally, after a decade, they succumbed to “market forces” at the end of 1980 as the old national armory that housed the concert hall was sold off to real estate speculators.

It was a devastating blow to the ‘Dillo community, which encompassed not just all the folks working there and the myriad musicians who performed there, but the hundreds and thousands of people who flocked to the shows, the beer garden, and the Christmas bazaar.

We spent a year in mourning and disbelief over the death of the Dillo. We were all too aware of what we had lost and all too aware how difficult it would to get anything like it back. Still, the spirit that had infused that old building bound “survivors” together, in longing for a resurrection of some sort. One local band that had often played the beer garden, the Octave Doctors, wrote and recorded a song titled The Dillo Shall Rise Again.

And indeed it did. Through combined efforts of some dedicated craftspeople and the ex-Dillo staff, an abandoned grocery store was found and plans were made for the 6th Annual Armadillo Christmas Bazaar, the first one after the loss of AWHQ itself.

I was lucky enough to hear about it ahead of time from some friends I’d met in my brief sojourn at the Texas Renaissance Festival. Somehow, I managed to talk my way in the back door with some video equipment from ACTV to document the event. So began an annual ritual I carried on for several years, producing and presenting a half-hour show each year to celebrate and promote the bazaar.

As Bruce has said in the years since, the production quality of those videos was never very good overall — but the historical document value remains incredible, capturing a lot of artists and bands and Dillo family through the 80s.

Over at ACTV, I was pushing their limits: shooting and editing and cablecasting a program within a week simply was not being done at that time. Over the years, I had to convince several successive ACTV program directors to bend the rules and schedule an unfinished program in order to have it show while the bazaar was still running.

So, that became my annual holiday routine through the 80s. With my friend Ann Wood helping out with interviews, I would shoot, edit, and cablecast a new half-hour program each year, mixing music with the artists and their wares as well as staff interviews and shoppers. I used to joke those annual programs were the slowest-moving series on access TV — one episode per year. Here’s a video playlist of those shows (chopped into segments shorter than 10 minutes to meet YouTube requirements circa 2009).

Then, I fooled around & fell in love (as I was just telling you) in 1989 and I stopped doing the annual video. By then, the bazaar was going full steam ahead under Bruce’s leadership as “Bazaar Czar,” assuring Austinites of a continuing holiday tradition for years to come. Of course I returned annually to shop and hear music and visit with my friends there, but I stopped carrying a camera around with me.

Later, with the advent of YouTube offering a platform for amateur videos, I posted some condensed versions of the “fossilized videos” from the 80s. Additionally, I started recording some newer footage, first of some of the bands like the Austin Lounge Lizards, and then of the bazaar itself. In 2010, I picked up the old pace a bit and shot and posted a daily clip (shorter) for the duration of the bazaar.

Video is inherently a view to the past — be it the immediate past, or “fossilized” files from decades ago — but the Armadillo Christmas Bazaar continues to replenish itself annually with new artists and an ever-changing line-up of music.

A few years back, Bruce decided it was time to pass the reins to a younger generation — many of whom had been there all along, growing up going to the bazaar through the years. They’re carrying the torch proudly forward now, for all the Armadillo folks and their children — and grandchildren! — as well as all the rest of us who remember the original (and unequalled) Armadillo World Headquarters.

So, we’re about to start another round of amazing music (three times a day until Christmas Eve) and handmade and unique gifts from over 160 vendors, and a reunion of epic proportions for all Armadillo lovers.

I am a native Austinite, a high-tech Luddite, lover of music, movies and stories and a born trainer-explainer.
View all posts by bullersbackporch →
This entry was posted in Austin, Buller, Casa Dexter, community, friends, Fun, music, musicians, video, youtube and tagged Armadillo Christmas Bazaar, Armadillo World Headquarters. Bookmark the permalink.