UPDATE: Atop the APEX

Posted on November 8, 2019 by bullersbackporch 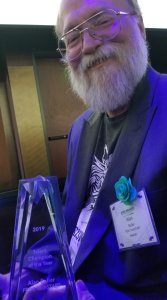 Yes, at Wednesday night’s APEX Awards, I received the Talent Champion of the Year Award from the Colorado Technology Association. Though I knew I was one of three finalists, I certainly did not expect to win.

There was a bit of a hint early, I suppose, when Cañon City was name-checked in the opening remarks.We have had a great deal of recognition for our entire rural region of Southern Colorado, so our growing reputation as an innovation cluster probably played into my victory.

I told the crowd that it was mildly embarrassing to accept the recognition for our program as an individual award, noting that it’s truly a team effort, so I was accepting on behalf of the entire team. After thanking CTA for the award, I called out several of our team partners personally: Diana Armstrong from FEDC; Brad Rowland, Jason Veatch, and Bob Wellott from TechSTART; Bill Summers and Lisa Tedesco from Cañon City High School — and the entire Cañon City community. I also gave a shout-out to Debby Kalk, as my quasi-mentor.

It was a bigger crowd than I had anticipated, and I’m afraid I did babble a bit during my brief acceptance speech. But afterwards, several people commented on my speech as they congratulated me — “heartfelt,” one called it. Well, it was.

Here’s a link to the list of all this year’s winners from the Denver Business Journal.

And here’s a link to the article on me, “Alan Buller resists retirement for rural revitalization” It’s always a bit strange to read this sort of write-up. This one’s mostly true.

Thanks to the Colorado Technology Association for this award. Victory is indeed sweet!

I am a native Austinite, a high-tech Luddite, lover of music, movies and stories and a born trainer-explainer.
View all posts by bullersbackporch →
This entry was posted in Buller, Cañon City, Instructional design, Learning, Technology and tagged APEX Awards, Colorado Technology Association, Debby Kalk, Talent Champion of the Year. Bookmark the permalink.