Posted on September 4, 2021 by bullersbackporch

Although neither of our parents played music, we grew up hearing it. Dad listened to Nat King Cole and Spike Jones and Mom hummed hymns and sang along with the radio. They bought a piano and signed both Scott and me up for piano lessons.  I took to the piano well, but Scott did not. Fiercely independent, he hated being told what to do and how to do it, so he hated the lessons, hated the piano, and quickly quit.

But he was not done making music. Come junior high school (middle school to you modern kids), you had to join either band, orchestra, or the choir. Scott chose band, playing the baritone. He played well enough to enter and win some competitions — with me accompanying him on piano. He even joined the high school marching band.

But playing in the marching band wasn’t what he wanted to do and he quit after a year.

Rock & roll pulled at his heart instead, and like thousands of kids before & since, he picked up a guitar. Starting to play during the heyday of the Beach Boys, he learned basic chords and simple songs (“In My Room,” notably his first), and started playing and singing with his buddies. Soon, they formed their first “combo.” That was the preferred term then. Nowadays, you’d call them a garage band. They started practicing literally in the bass player’s family’s garage — and attracted a small crowd of neighborhood youngsters. including, importantly, girls.

That first combo was named the Synz — chosen at least in part because you could write the name on the bass drum with simple, straight lines of black tape. Combo names were dropped and changed pretty regularly, especially if your combo was new and unknown. Scott’s combos changed names often enough I can’t remember them. I do remember one brief contender, Strawberry Window — which was most likely  an unrecognized reference to “windowpane” acid, which none of us had ever even seen much less tried at that tender age.

Psychedelia slipped into the rock & roll scene sometime right along in there, leading Scott & friends into increasingly experimental edges of rock & roll, as they followed the newer music only heard on late night “underground” radio programs. 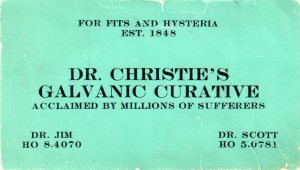 Years have worn away the sparkly luster it originally had

They spotted an old-timey ad in an underground newspaper and presto! change-o! Dr. Christie’s Galvanic Curative was born, complete with eye-catching business cards featuring the ad’s slogans such as “For Fits & Hysteria — Est. 1842” as well listing two contacts, Dr. Jim and Dr. Scott.

I loved watching our father answer the phone during dinner and hand it over with a roll of his eyes, saying, “It’s for ‘Dr. Scott’.”

Back up a year…Dr. Christie’s Galvanic Curative was actually established 1968, so these two turning points preceded that.

Scott got his first paying gig with the combo in 1967, playing for the Grand Opening of a discount department store, FedMart. After their set, each band member got to select 3 albums from the store’s record department.

For his 3 albums, Scott chose Grateful Dead (debut), Are You Experienced? (Jimi Hendrix’s debut), and The Peanut Butter Conspiracy is Spreading. He hadn’t heard any of this music, but he’d heard of the Grateful Dead and loved the Jimi Hendrix cover. “2 outta 3 ain’t bad,” he used to say, figuring that the Peanut Butter Conspiracy was a solid miss. 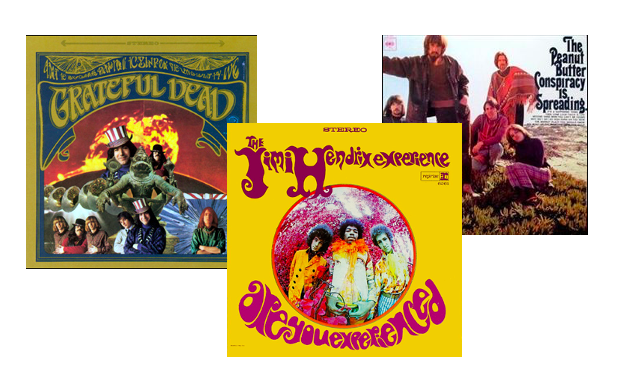 But it turns out his selections were more like 2 and a half out of 3. Although they never made it big like Hendrix & the Dead, the Peanut Butter Conspiracy played a seminal role in California’s psychedelic scene. They released another album, toured nationally, and recorded for a half-dozen movie soundtracks. The original drummer, Spencer Dryden, did achieve wider fame once he joined the Jefferson Airplane to replace Skip Spence after Skip split to form Moby Grape — another band my brother introduced me to.

Summer of 1967 — Scott and his buddies let me tag along with them to a rock & roll concert. I was just 12 and excited to see the headliners, Herman’s Hermits. Riding a string of radio hits, they were at the pop pinnacle and personal favorites at the time. I loved that one guy in the band wore glasses, like me — not your typical rock & roll look, despite Buddy Holly. 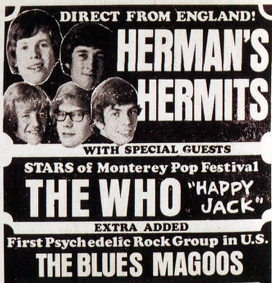 My brother and his buddies were more interested in the two opening acts. They already played a song they picked up from the Blues Magoos, a psychedelic version of “Tobacco Road.” Sandwiched between the Blues Magoos and Herman’s Hermits, was the Who, on their first U.S. tour.

I knew nothing about the Who at this time, really. Despite their string of pop hits in England, US radio listeners only knew them by “Happy Jack,” and I’d hardly heard that at all. Scott grinned, adding, “They smash up their instruments at the end of the show.”

I’d never seen anything like it when they hit the stage. Watching Townshend windmill away on his guitar blew me away. Daltrey swirled a paisley cloak around him while swinging his microphone like a rock & roll lasso. Moon the Loon twirled his drumsticks, tossed them in the air, and attacked his double-bass-drum kit with a fervor I’d never seen before. Halfway through the set, he grabbed one of his floor toms and tossed it backwards over his head where it bounced off the drum riser and disappear down behind the stage somewhere. The whole outrageous scene on the stage simply matched their frenzied music. Except for the bass player, John Entwhistle, who just stood off to the side, barely moving, almost like an anchor to keep the band from flying off the stage entirely.

They tore into “My Generation” in a chaotic crescendo. Townshend tossed his guitar high i the air overhead, spinning it and catching it. He rammed the neck it into his speakers, finally grabbing by the neck and swinging it overhead to smash it down, splintering the body. Moon, smoke swirling all around him, kicked over every drum within reach while Roger swung his mike into the cymbals repeatedly. All the while, Entwhistle stood there motionless, thumping a steady baseline below the screeching feedback and roaring destruction.

One by one, Pete, Keith, and Roger all left the stage, leaving only John. He undid his strap, took off his bass, turned it strings down, and dropped it, walking off as its thunder roared, and slowly died away.

It took them 30 minutes to clear away the debris before Herman’s Hermits could take the stage. I don’t even remember hearing them. Their string of pop hits was coming to an end as bands like the Who rose in ascendancy.

I do remember we did after the show. None of us were old enough to drive yet, so we were waiting for one of the parental units to come pick us all up. Scott and his buddies, David & Jim, started talking about some new music they had just heard that afternoon. Some band called “The Mothers of Invention” had put out this weird album called “Freak Out.” They were trying to sing one song they kinda remembered, warbling in near- but unmistakably slightly off-harmony, “It can’t happen here…It can’t happen here…”

Yep, that summer day in ’67, Scott turned me on to both the Who and Frank Zappa. Sure spun this 12-year-old kid’s head around.

But my big brother, Scott, was not done turning me onto music yet.

I am a native Austinite, a high-tech Luddite, lover of music, movies and stories and a born trainer-explainer.
View all posts by bullersbackporch →
This entry was posted in Family, music, musicians and tagged Are You Experienced?, Dr. Christie's Galvanic Curative, Freak-Out, Grateful Dead, Jimi Hendrix, Jimi Hendrix Experience, Mothers of Invention, Peanut Butter Conspiracy, Scott Whitebird, The Who. Bookmark the permalink.