Reelin’ in the Years

Posted on February 12, 2022 by bullersbackporch

A new gadget arrived for me a day early. I wasn’t expecting it until today but was delighted to get my hands on it yesterday. Having just re-opened a doorway to the past by resurrecting my old record collection, I was moved to search out another “time machine” to transport me back into my memories. See, I have dozens of Hi8mm videotapes dating back to our 1999 journey to Alaska, including Will’s tour of Italy in 2006. I’ve had more than one Hi8mm camcorder in the past (hence the tapes), but they’re all dead & gone by now. Without a camcorder, those tapes remain a shrouded mystery, an unreachable memory bank with who knows what treasures.

Internet to the rescue, right? 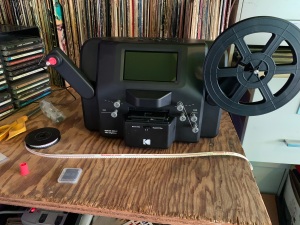 Well, in addition to what I was looking for in my search, I found a device that would help me reach even further back in time the all those Hi8mm videotapes. Thanks to discovering the Kodak REELZ Film Digitizer, I am now in the process of digitizing old home movies from my parents. Those Hi8mm videotapes can wait.

Over 20 reels of 8mm and super8mm film, taken throughout my childhood years, await transfer. From August 1955 until the mid-70s (and beyond in some instances), my parents captured event after event on little 3-minute reels of 8mm and Super8mm film. Dad later compiled those smaller reels onto larger 5-inch reels for easier viewing in the years to come. Thank you, Dad, for labeling most of those reels. That does make this easier.

So, I dove into figuring my new gadget out yesterday evening. Well, that didn’t take long. It only took about 10 minutes to get it up and running for a test with one of the smaller reels.

That first reel showed me two things quickly. First, it will take a long time to digitize these films. A really long time. An enormous amount of time. The process involves advancing the film one frame at a time and scanning that frame, compiling a MP4 file of moving images from those static scans. Since film has 24 frames per second, that means each minute of film requires 1,440 separate scans to be taken. I started with one of the smaller (3-inch) reels of film and that took close to 45 minutes to digitize. Each larger reel will take several hours. And you have to monitor the process constantly, just in case the film stops advancing — as has already happened a few times. Good thing you can pause the process. I foresee multiple transfer sessions per larger reel of source film. I’m going to be at this for weeks.

Secondly, shooting home movies suffered from a lag in reviewing what you shot. First, you you shoot the film. Then, you mail it off to a film processor and wait for the developed film to come back. That usually took at least a week. Only then could you actually see what you had filmed through the lens. Movie cameras back then had no auto-focus nor automatic exposure, so you took your chances are you shot the film. Was the exposure right — or was it too bright or too dark? Was it framed well — or did you cut off the subject’s head? Was it in focus — or a blurry mess? In this instance, the entire 3 minutes (3 inch reels pretty much produced 3 minute movies) were badly out-of-focus, rendering the footage almost unrecognizable. Moreover, I didn’t know if that was an issue with the source film or a result of the transfer process.

The device does allow for some adjustment of the framing as well as some picture adjustments, including a control to enhance sharpness. But even that didn’t work too well with this first reel’s  footage. I despaired that maybe a lot of the old home movies were likewise too blurry to use.

Then, I threaded the other 3-inch reel — and discovered Jessie playing in a kiddie pool in the backyard of my family’s Houston house. There she is, sitting on Scott’s lap on a tree swing. Here she is, trying to play with Josh, the dog. And throughout, she keeps looking up at the camera —and smiling. And I am sobbing and gasping for breath, a joyful pain at the sight of her., alive again 33 years after her death at age 5.

So, I have begun the lengthy process of digitizing the many rolls of film my family accumulated through my childhood. I completed the transfer of reel #1 (August – October 1955), where I got to see my Grandfather walking (before he lost his leg), Granny Tilly walking with a limp but no cane, and my father running across a yard to get away from Mom spraying a hose in his direction — all things gone from my memory. I can’t remember Granddad walking nor Granny without a cane. And Dad’s smoking-caused emphysema started to limit his physical exertions — eliminating even a  2-second dash across the yard — years before he died in the mid-90s.

I’ve set my new Wayback Machine for 1972 this time., skipping ahead a few years. This reel, unlike the early ones, shows Mom’s handwriting and offers this summary of the contents: “Big Bend 72, Creede 72, Winedale.”

I can hardly wait!

I am a native Austinite, a high-tech Luddite, lover of music, movies and stories and a born trainer-explainer.
View all posts by bullersbackporch →
This entry was posted in Buller, Movies, time travel, travel and tagged home movies, Kodak REELZ Film Digitizer. Bookmark the permalink.