Coming to the Classics via Comic Books

Posted on February 19, 2022 by bullersbackporch

I’m re-reading Mary Wollstonecraft Shelley’s Frankenstein, or the Modern Prometheus for the first time in many years. 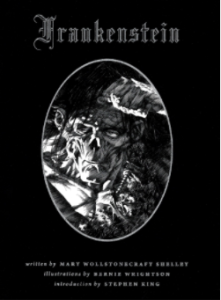 That last time I read it, circa the 70s I think, I had a dog-eared copy picked up for a buck in a used bookstore. This time, I am enjoying an elegant super-sized hardback reprint edition of the original novel, with incredible illustrations by Bernie Wrightson.

I bought this beautiful edition, an enlarged reprint of the Marvel Illustrated Novel published in 1983, about a dozen years ago as a collector’s item. It has sat on the bookshelf in our home since then, awaiting someone to read it. At last, its patience has paid off and now I am greatly enjoying re-reading Mary Shelley’s original story.

Stephen King wrote the introduction for this illustrated edition, offering this opinion:

“…more people have come to this novel with high expectations that are dashed than perhaps to any other book in the English language.”

King admits he tried to read it as a 13-year old — but gave up, like many young readers seeking the thrill of the monster movie they already knew. He never even tried re-reading it until he was backed into doing so in order to teach it in high school many years later.

It’s quickly apparent to any eager young reader familiar with the 1931 movie, “This is not the Frankenstein I know!” The book moves at an appropriately Victorian pace, building scenes and characters with magnificent and moving prose. But that means the “monster” we so love to fear hardly even shows up in the first half of the book. Thrill-seeking readers generally give up long before then.

Anyway, I understood what Stephen King was talking about. I could see how disappointed a fan of the Frankenstein movie might feel while reading the novel. But the thing was, that was not what I had experienced. I knew the book would tell the same basic story differently. I realized the reason I did not find the original novel disappointing was that I had taken a different road to my encounter with Mary Shelley’s original tale. After seeing the movie, but before reading the book, I came across Mary Shelley’s story in Classics Illustrated comics #26.

Who else is with me in fondly remembering the Classics Illustrated comic books? I don’t remember how many literary classics I first read in comic book form thanks to Classics Illustrated, but I can assure you that I read only the comic book version of more than a few books. Classics Illustrated started pumping out these renditions of classic novels in 1941, so there were plenty already out there when I was a kid, featuring mostly 19th Century authors such as Jules Verne And Alexander Dumas. And, of course, Mary Shelley.

So, my love of the visual storytelling style of comic books definitely predated the 60s era of Stan Lee’s iconic Marvel comics. I loved the Superman and Batman comic books of the day, but part of me enjoyed the classics even more. This was high-brow stuff. Even a kid like me could tell that. Most importantly, it gave me a curiosity about those books of old, something almost bordering on a hunger. More than one Classics Illustrated comic book led me to track down the original novel and read it.

Reading the Classics Illustrated version of Frankenstein had prepared me for reading the original novel as it had been written — sans pictures or soundtrack, using nothing but the written word to enchant and excite the reader in the good old-fashioned way. I loved it. Everything about the book thrilled me beyond the movie I knew. I still loved the movie. I just loved the book, too, now. I began to appreciate the differences between the gothic novel and the monster movie. I even found I could enjoy each one for their own sake. Classics Illustrated bridged that gap for me.

For now, I need to finish re-reading Mary’s tale of terror — and enjoying Wrightson’s stunning illustrations. After that, I figure I ought to watch Boris Karloff re-brand the beast into a Hollywood icon in the movie version he starred in over a century later.

No, this scene does not occur in Mary Wollstonecraft Shelley’s book.

After all, nothing like a good monster movie on a Saturday night!

I am a native Austinite, a high-tech Luddite, lover of music, movies and stories and a born trainer-explainer.
View all posts by bullersbackporch →
This entry was posted in books, Movies, storytelling and tagged Bernie Wrightson, Classics Illustrated comics, Frankenstein, Frankenstein or the Modern Prometheus, Mary Wollstonecraft Shelley, Stephen King. Bookmark the permalink.