Granddad Stranded on the Road to Sonora

Posted on March 3, 2022 by bullersbackporch 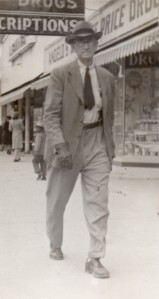 Granddad often wrote more than one account of the same incident in his memoirs. As he explained, he just wrote whatever came to mind when it came to mind, so some repetition is to be expected. This is another instance of duplicate passages. In this instance, both accounts match in the details. That was not always the case.

I’m not a mechanic; But when there are no mechanics around and there is something that needed to be done I was always ready to try my hand at it.

So one fine day when I was on the line as a driver, I met the other driver at Thompson’s mailbox a few miles this side of Calcoats store and about 7 miles the other side of Christoval, and rolled up to the box to serve the box and we stood there talking a bit; and he asked me if I wanted him to turn back; And I told him that I would go on for I had some business down at Sonora and that I needed to go on down there, And he drove on, and after I served the box, I was prepared to go on, and behold the engine would run, but when I put it in gear it would not budge any way that I would try it.

Then I looked and the drive was at the top of the hill, a mile or more. And I hollered and did get nowhere, and I turned that old 38 colts loose two or three times and did not stop him, and I saw that all was gone as far as he was concerned, and I left the passengers there with the car and walked down to Thompson’s house, more than a mile, and phoned back to the Christoval, and the driver had just left there, and I called the Garage, and asked if there was any one there that was coming on down the road, and he said that a truck was there; and I told him how the thing was working, and he told me that it could be either axle or the drive shaft. Or just a cottle key; and I told him to send me both axles, and a few cottle keys, and that I would take back all that I did not use; and I had to wait about 30 minutes for the parts, But in the waiting I had nearly time to get the rear end of the car out and when the man got there I found him to be a good mechanic, and he flew in and helped me to finish the job; and I was pretty soon on the road again.

So I found that necessity some times prepares us to put some confidence in ourselves. In other words, Necessity is the Mother of Inventions.

I am not a mechanic Or the son of a mechanic. But I have had to be a mechanic till the mechanic come.

I remember one morning I went out from this P.O. and to carry the mail through, and I met my driver that had spent the night at Sonora, at Thompson’s mailbox about 7, 8, or 9 miles the other side of Christoval, and we sat there and told each other what was on our minds and started on.

Well I had to serve the box and when I started to go on I found that my car could not move. But the other boy was a good mechanic So I jumped out and tried to hollow him down. But it was to no avail for he was beyond where he could hear. Then I fired that old 38 of mine over his way about six times and that did not stop him; so I just left my car in care of the Lady that was going to Sonora and went down to Thompson’s house about a mile and no one was at home so I could see a telephone in the house so I went in as the house was open and used the phone, But the driver had just left the P.O. there at Christoval.

Then I had them to switch my call to the Garage there and I told the Mechanic how the car acted and he said that it could be a broken axle or broken Drive shaft or it could be a sheared cottle key. So I just told him to send me Both axles, A drive shaft, and a few cottle keys. And there was a man there fixing to come out on the road right then, so he sent them to me and when he got there I had already had the car torn down and as I had watched a mechanic once do a job like I had to do, I had layed every thing out as I had taken them out and I just had to use a cottle key that they had sent me, and two hours from the time that I began the job, I had it ready to go on down the road.

That taught me that a man could do anything that he had to do. So all that it cost me was 15 cents for the cottle keys for I brought him back all the other stuff that he had sent out to me.

I am a native Austinite, a high-tech Luddite, lover of music, movies and stories and a born trainer-explainer.
View all posts by bullersbackporch →
This entry was posted in G.M.C. Massey and tagged Christoval, mechanic, Sonora. Bookmark the permalink.