A Bush A-Buzz with Bees

Our son popped in briefly yesterday and as he was leaving, he spotted a bunch of bees buzzing around our lilac bush out front. Sure enough, I walked out with him and there’s a few dozen of them flying around one side of the bush. Approaching closer, we saw a clump of them gathering on a branch and realized they were swarming. They completely covered at least 2, maybe 3 feet of the branch, like the sleeve of a puffy coat worn over several layers of clothing.

I knew not to disturb or try to  destroy a bee swarm. I knew they did not pose a threat nor present a problem where they were. Still, I felt that we should find someone to remove them.

As soon as I posted this short video, I started getting local responses and suggestions. Within an hour of spotting the swarm, I had spoken to someone who agreed to come get them for a new hive. Eventually, I was given at least 4 other names of local beekeepers who could come by and get the swarm if need be. Good to know how quickly folks reached out with helpful information.

Stu Rhodes was who we got and he was a pleasant fellow. He took a look at the swarm and got his “bee box” to collect them. Carefully donning a beekeeper’s suit, he placed the box under the branch where the bees were clumped together. Trimming out smaller branches in the way, he sprayed them with some sugar water to calm them down, and then bending the branch down somewhat, he tapped it a couple of times and the mass of bees fell down into the box.

Well — into, on, and around the box. But they were seemingly undisturbed by the downward tumble and even those outside of the box still hung together and started moving into the box. Stu went off to get a “brood cage” and came back. By inserting that into the box, he made it even cozier for the bees by signaling that this was a place with eggs. He put a lid on the whole thing, cut an access hole and secured it, intending to return to retrieve them when they settled down around sunset.

I remembered when I lived in Creedmoor and this fellow name of  Old Max came by with a flatbed holding about a dozen hives. Pointing at the empty field behind the house, he said he asked to park his hives there so his bees could get to a line of mesquite trees beyond the field. “Mighty sweet honey,” he assured me, giving me a 5-gallon jar of honey as down payment for leaving it there. I quickly agreed and he pulled the truck out into the field to get set up.

Old Max did not use a beekeeper’s suit as he worked setting up the hives. I watched this one bee light on his finger and hang on firecely. He’d shaken others off, but this one persisted and acted threatening. Max looked down and said, “Ya gonna sting me or ya just gonna fuck around?” and shook his hand vigorously enough to dislodge the bee who buzzed his face once but left.

Later that day, one roommate, Greg, came home from work and reached over to refill the dogs’ water bowl before coming inside. Spotting 20 or more bees on and around the water at the last second, he jumped back yelling. Little did I know Greg was highly allergic to bees. He hadn’t been stung right then nor would he be while Max’s hives stayed out back, but he learned to look twice before reaching for that water bowl.

In fact, we loved taking friends out to stand near the flatbed truck about 10 minutes before dusk. That’s when the bees all headed back to their hives from every direction. By standing there, facing towards the flatbed, you could see them zing past you and hear them whizzing past, veering remarkably close to your head and ears. But they had no interest in people at that time of day. Even when they flew directly into your back, they’d just bounce off, fly around you and head home into the hive. 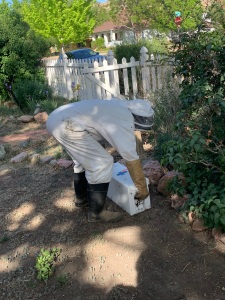 Stu didn’t come back at sunset. He went home, ate, and by then, decided to return to retrieve them in the morning. The bees meanwhile, all crawled into their new temporary home and hunkered down for the night.

With the sun coming up this morning, though, some of them did wander back out of his mostly-sealed box, but by 8:30, he’d returned, suited up and calmly collected the box.

Some of the stragglers stayed behind, still buzzing around that same bush today.

No swarming yet, but if they do, well, now I have several folks I could call.