Posted on June 5, 2022 by bullersbackporch

I constantly warn people I meet that I am lazy. A lot of them don’t seem to believe me just because I’ve done a few things they know of. But you see, being lazy is a big part of that, too. I am just lazy enough to want to avoid doing work that won’t advance me towards my goals and just patient enough to wait until it’s clear what will actually do that. Sometimes what we think we need to do shouldn’t be done at all.

See, a lot of people who pride themselves on their productivity participate in pre-crastination as described by author Adam Grant. He admits he has always been one to jump right in on the task at hand and push through to completion. Imagine his surprise when his most creative student questions that habit and proceeds to prove that procrastinators are more likely to come up with creative solutions.

“But while procrastination is a vice for productivity, I’ve learned — against my natural inclinations — that it’s a virtue for creativity.”

First, the student, Jihae Shin, asked people working at a couple of companies how often they procrastinated. Then, she surveyed their supervisors and found that the procrastinators earned significantly higher creativity scores than their peers.

In an additional, simply structured experiment, she asked people to come up with new business ideas. Some people were told to start right away. Some were told to play a simple game like Minesweeper for 5 minutes before starting That second group produced ideas rated 28 percent more creative.

Need more proof that procrastination can produce great work? History is full of productive procrastinators, from Leonardo da Vinci to Victor Hugo to Franz Kafka to the Dalai Lama to Steve Jobs. Consider this example:

Frank Lloyd Wright spent almost a year procrastinating on a commission, to the point that his patron drove out and insisted that he produce a drawing on the spot. It became Fallingwater, his masterpiece.

So, what to do while procrastinating? Nothing.

This New York Times article from Nov 2019 suggests we go Dutch — in a matter of speaking.

“What we’re talking about is … doing nothing.
Or, as the Dutch call it, niksen. More practically, the idea of niksen is to take conscious, considered time and energy to do activities like gazing out of a window or sitting motionless.”

It turns out that by keeping ourselves busy at all times, we may be losing our ability to sit still because our brains are actually being rewired. The fidgety tendency to whip out a phone and check social media dulls us to our most deeply creative mind meanderings, only available really when we’re bored. We’ve grown so used to constant external stimuli that we view boredom as something that must be fixed.

Yet, boredom, like procrastination, can serve to really pump up the creativity. That’s where daydreaming comes from. That’s when our minds wander around, matching old ideas and experiences to find or create new ideas. In our fast-paced modern world, sometimes we have to seek out silence, stillness, and boredom to let our brains rest & recuperate.

So, I don’t mind getting bored sometimes. It works well with my natural tendency to procrastinate. I’ll leave you with my doodle alter ago, Unk, and a piece of wisdom lifted from a t-shirt seen many years ago. 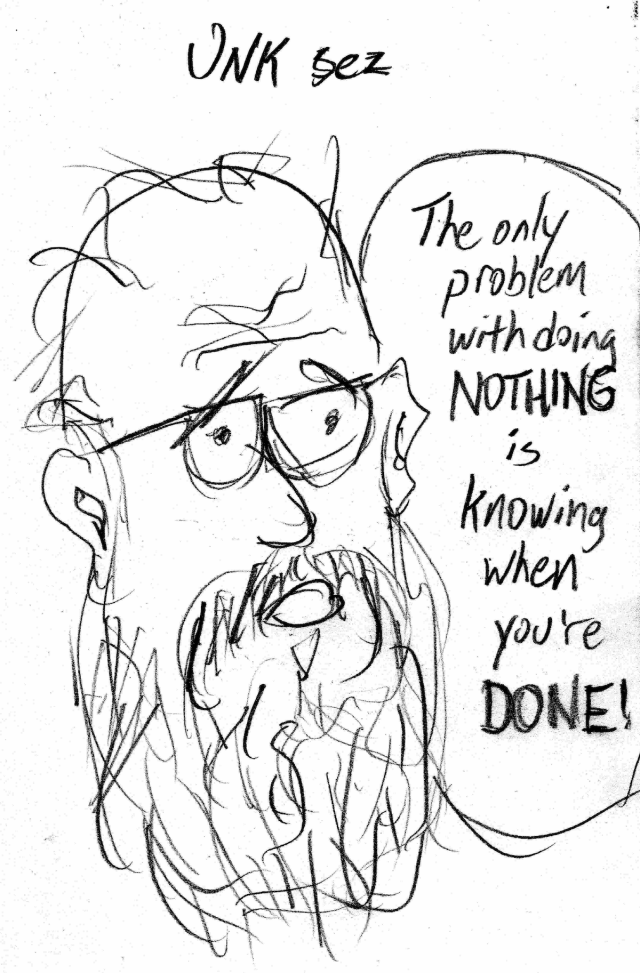 I am a native Austinite, a high-tech Luddite, lover of music, movies and stories and a born trainer-explainer.
View all posts by bullersbackporch →
This entry was posted in behavior and tagged boredom, laziness, procrastination. Bookmark the permalink.