Posted on February 23, 2018 by bullersbackporch 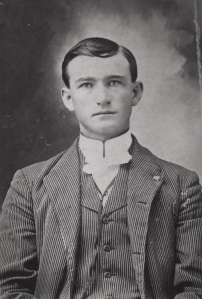 Our guest blogger, my grandfather, G.M.C.Massey wrote multiple versions of some of his stories in the various manuscripts of his memoirs. Here is an instance of 2 versions of the same events — with only one significant variation, leaving the reader with one simple, but central, question:

Who planted a kiss “where it would do the most good”?

My grandmother, My father’s mother, was very sick, and we went to her aid and assistance, and while I was there I got acquainted with two very fascinating girls:

One a very large Blonde, And the other was a very nice small brunette: and She was more aggressive than the other, and as you might say she took over, And I was already engrossed in the Girl that I afterward married I took no delight in either one of the girls, only as a passing fancy; And just for the fun of the thing as the saying goes, I just let her do the sparking. And she was up to game pretty well; For in the two or three days that we stayed there; She engaged us, as she proved it; For she encouraged me to go back down there in about two weeks; and she met me at my GRAND-Mothers, and tried to make me believe that we would have to hurry and get married before her DAD found out what it was all about For he was a dangerous man and had to be watched; But I told her that I was not entirely satisfied about the matter; and would have to write her my decision when, or if I wanted to go through with her arrangements. I would let her know what the arrangements will have to be made; But when the day was far spent; I told her that I was going to have to start home as I was driving a Young Animal, and I had better start in time to not be too far in the night getting home; And that I was going to take her home and meet her parents, and get acquainted with them; And she very reluctantly agreed to my terms, and we went on to her place, only a mile and 1/2 or two miles at the most, And it was not long till we arrived at their home; And about a quarter from the house, we went through a gate that let us out of the Old “Biggerstaff estate”, and I opened the gate, and she drove through, And she proposed that I go home from there, and let her walk on to the house; But I overruled that as I got in the buggy, and drove up to the house, and when we arrived, I jumped out, and tied my mare to a tree, and went in with her, and met her parents, and they seemed very proud to meet me, and invited me into their front room, and insisted that I spend the night, as it was a long distance to my home; And the day was far spent; And as I had to drive a young mare, that was not very well trained between the Shafts; But when I explained the matter to them; they were very well satisfied to let me go: And as I went out the GIRL went too, and when I went to tell her good-Bye; She held on to me till I planted a kiss right where it would do the most GOOD: And that was the last time that I saw her: And The day that she appointed for she and I to get married; I married the woman of my choice.

And from there we move to another of my infatuations: I was 21 years of age when my Grandmother (Father’s Mother) was taken very ill and we went down there. She lived South of Mt. Vernon in Franklin County And there I met with two girls that seemed very devoted to my Grandmother, and they each one played up to me; But one, A brunette seemed more aggressive than the Big Blonde did. And I did not care for either, as I had my mind made up as to a mate for life in another direction. But I just gave her the reins, and she led on towards an engagement, and she sure engaged us before we left for home, as we stayed there till Grand Mother had made a definite turn for the better, But I had to agree to come back to see her In a couple of weeks, and she held out that she would have to meet me there at my Grand Mothers, And as she had done all of the sparking, I just let her have her way about the matter.

So after two weeks I went back down there, and she met me, and wanted us to get married on that trip. But I told her that I had other arrangements, and that there was a time to assert myself, and that I was not going to go into a life long arrangement without knowing all the surrounding details. And as I was several miles from my home, and I was driving a young animal to the buggy, and needed daylight to make the drive of 18 miles, I told her that I was going to take her home and that I was going to get acquainted with her mother and Father, and she fought the Idea, and said that it would be very unsafe for me to attempt such a thing, So I just said nothing more about it till we got out at the big gate, down from the house about a quarter, and as she had driven through the gate, I just got in the buggy, and drove on up to the yard gate, and got out, and went in with her, and she made me acquainted with her parents, and they invited me in to the parlor, and treated me just as fine as I could ask for, and wanted me to stay for the night, But of course for the reason I have given; I could not, and as I left, I had her to go with me out to the buggy, and I told her that the underminding holt that she had tried to take on me about hurrying up the matter was why we were not going any further in a rush. And then she said that we would put it off till the first day of September, And I consented with the understanding that if I wanted to still stand, That I would let her know before that date, and that I would not see her before that time, And then I drove off But not till she had planted a kiss where it would do the most good. And on the date that she had set I had already engaged for my wedding to the girl that I married, And that was that.

I am a native Austinite, a high-tech Luddite, lover of music, movies and stories and a born trainer-explainer.
View all posts by bullersbackporch →
This entry was posted in anecdotes, Family, G.M.C. Massey, love, Memoirs. Bookmark the permalink.